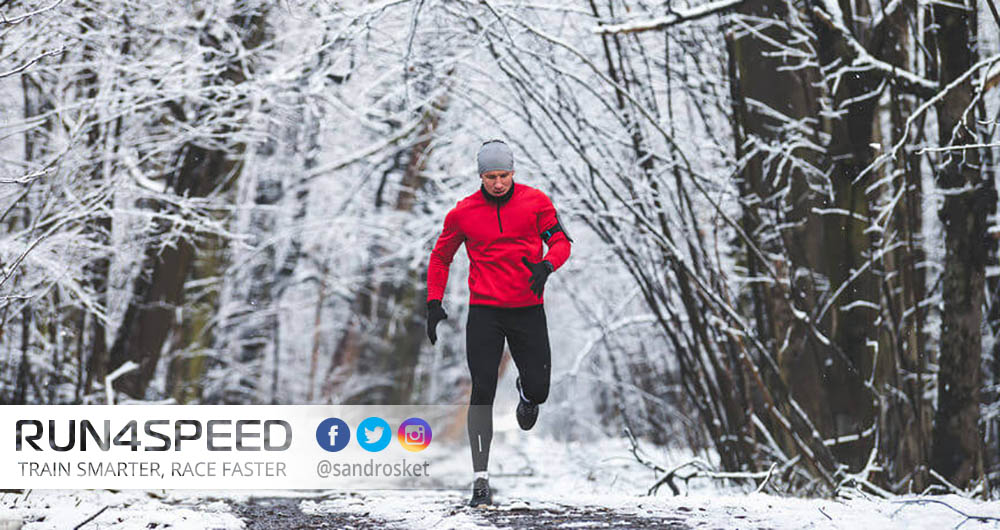 Winter Running: How to Lay the Groundwork for Next Season

Winter running has its challenges. The days are short and it takes a few layers of clothing to make outdoor runs bearable. Even if you take it to the treadmill during this time of the year, you may not be looking forward to your runs the same way you do at a sunny afternoon in spring. But those who prevail and train strategically will reap the rewards further down the line.

“There’s no such thing as bad weather, only bad clothes.”

The best way to deal with gloomy weather is to change your focus from the weather to the desired goal. I boarded a 30-hour flight itinerary recently from Frankfurt via LA to Rio de Janeiro. Had someone boxed me into a tight space for 30 hours without the prospect of the sunny Copacabana I’d have been utterly miserable. Change your focus to the outcome.

The groundwork for next season’s success is laid in winter by establishing a solid aerobic base as well as a base of general speed. That doesn’t mean you don’t deserve a break during the festive season. I actually recommend my athletes to cut back on running for about a month excluding race-pace workouts. But comes New Year you will have to gradually build your mileage to peak levels again.

In order to rebuild a solid aerobic base you will need about 8 weeks. Perhaps not the most exciting period of training, but a relatively easy one. Developing an aerobic base really comes down a high volume of easy mileage including extended long runs. There’s not much that can go wrong except increasing your overall mileage or long run distance too quickly.

What requires more foresight and planning is how you lay the groundwork of speed for the coming race season. Don’t worry, I won’t send you to an icy track during winter, nor do you necessarily need any VO2max or lactate threshold training during this period. But running-specific strength training and general speed are mandatory if you have time-based goals.

Before we get to the higher intensity zones, a few words about easy running. During the off-season as well as the base period our fitness levels drop slightly due to the absence of VO2max and lactate threshold (LT) training. Therefore, the pace of easy runs has to be adjusted downwards. To that end monitor your easy runs and long runs by heart rate (60 – 70% of VO2max) instead of pace.

Whether you include Vo2max and LT training during the base period depends on the training concept. Advocates of linear periodization would leave it out and non-linear approaches typically include some training at those intensities. In that latter case you could alternate VO2max training with LT training on 1 day a week without overexerting yourself.

Though, what consider more important during the base period is developing general speed alongside your general endurance. Both form the foundation to maximize your VO2max and LT pace at later stages. I recommend to add 4 – 6x 100m strides at 800m pace to your easy runs twice a week. Perform them during the middle of your workout when you’re warm but not yet fatigued.

Throw in some strength training and there’s no stopping you in the upcoming race season. Establish a routine with a focus on running-specific strength exercises emphasizing core and leg muscles. The off-season and base period allow for more of this kind of training but consider continuing a maintenance routine year-round.

In summary: Dial back on weekly mileage for a month during the winter season and then transition to the base period building your easy mileage up to peak levels. Cut out or limit the demanding race-specific paces (marathon – 3K pace) but include strength training and strides twice a week to develop your general speed as well. In other words, polarize your training during winter running.